This natural treatment effectively and quickly regulates the ovulatory cycle. It is entirely composed of natural plants and roots with no side effects on health. It aims to restore your cycle and allow you to get pregnant by regulating the hormonal system naturally. Don't worry lady! You will get pregnant very quickly 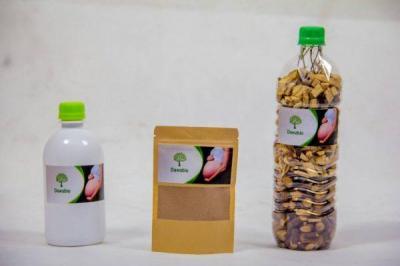 This natural treatment effectively and quickly regulates the ovulatory cycle. It is entirely composed of natural plants and roots with no side effects on health. It aims to restore your cycle and allow you to get pregnant by regulating the hormonal system naturally. Don't worry lady! You will get pregnant very quickly

To place an order directly or to speak with our experts, please contact us at +229 99 546 463 (number available via the WhatsApp mobile application).

You are in a couple with your spouse and it's time to have a child. But ever since you stopped using contra methods, you have had the feeling that something is wrong. However, your period takes a long time to come back. However, if these problems continue without getting pregnant, you probably have anovulation (lack of ovulation). This is the most common cause of infertility in women. Don't worry, ovulation disorders are by no means synonymous with sterility. Therefore, this treatment with herbal remedies to cure the lack of ovulation will allow you to restore your ovarian function and carry a pregnancy. You can trust us! It is nature's secret to regain normal ovulation and get pregnant.

It is a powerful uterine tonic during ovulation and then has a constructive effect on the reproductive hormones. Thus, the herbal tea contributes to the improvement of oestrogenic activity and also helps to increase low progesterone levels. It is a natural and effective remedy that will allow you to ovulate again.

The use of natural herbs generally gives positive results and acts significantly to induce ovulation. It is often necessary to think outside the box and follow the solutions that nature offers us. However, the absence of ovulation can have several causes apart from a hormonal imbalance (polycystic ovaries, hypothyroidism, excessive thinness etc...). The natural treatment that we will provide you will depend on the cause of anovulation. This is why we advise you to meet with a gynecologist who will make a formal diagnosis regarding the cause of your anovulation. But we will take this into account in the composition of the treatment products. This will allow us to make a better treatment to cure the absence of ovulation (anovulation).

Being natural products based on plants and herbs, our herbal teas have no side effects, either on the body or on health. Our treatment is therefore not dangerous. It is the solution to regain normal ovulation and get pregnant without fear of side effects.

NB: You must go to the gynecologist so that the cause of your lack of ovulation (anovulation) is clearly established. Then send us the results. This will then help us to establish the best treatment for you.

Duration of treatment: Our treatment with herbal remedies for lack of ovulation (anovulation) varies from 1 to 2 months. It depends on the cause of your anovulation. Don't worry! Soon you will be able to ovulate again and you will know the joy of being a mother. Our care is individualized. It varies according to your symptoms and your expectations.

Advice to follow in case of absence of ovulation (anovulation)

To regain normal ovulation, some simple tips can be helpful. It is :

To order directly or chat with our experts, contact us on +229 99 546 463 (number available via the WhatsApp mobile application.

Lack of ovulation is not a disease in itself, but a symptom of various disorders occurring in the female body. Some of the causes of the anovulatory cycle include hormonal disorders associated with thyroid disease, overproduction of androgens leading to decreased levels of female sex hormones, diseases, and disorders of ovarian function such as polycystic ovary syndrome (PCOS), anorexia or severe weight loss, changes in the ovaries in the form of tumors, cysts and fibroids, long-term use of contraception, the effect of certain antihistamines, antiemetics or psychotropic drugs.

In addition, the anovulatory cycle is affected by changes in the hypothalamus and pituitary gland, whose role is to produce hormones that stimulate egg maturation. They can be caused by factors such as hyperprolactinemia, exposure to stress, various neuroses, and depression, pituitary diseases (hypofunction, inflammation, tumors).

Symptoms of the anovulatory cycle

Symptoms of the anovulatory cycle include irregular cycles, the absence of a high-temperature characteristic of ovulation, and the absence of other conditions associated with ovulation, that is, for example, pain in the lower abdomen. It is also important that during the anovulatory cycle, abnormal and very rare menstrual bleeding can occur as normal (sometimes delayed) and normal spotting or periods.

Menstruation during the anovulatory cycle is also very heavy or stops completely. In addition, the anovulatory cycles may be shorter or longer than the average 28 day cycle. The mucus is thick, sticky, and white (or cloudy), it does not turn into transparent, wet, or stretchy. The chronic anovulatory cycle can also lead to problems with hypertension, lipid disorders, insulin resistance, hyperinsulinemia, and type II diabetes.

The usual menstrual cycle consists of four consecutive stages, namely menstruation, follicular phase, ovulation and luteal phase. There are only the first two stages of the anovulatory cycle. Heavy bleeding, which can occur during the anovulatory cycle, carries a risk of anemia, osteopenia, and later even osteoporosis, so its regular appearance should be seen by a gynecologist.

If you have pregnancy problems, you can take an ovulation test. Its role is to measure urinary lutropin (luteinizing hormone, LH). The concentration of this hormone affects the release of an egg from a ruptured Graaf follicle. The highest concentration of LH occurs just before ovulation. We do the test a few days before the expected ovulation. It is also used to determine fertile days and when fertility is at its peak.